Hasbro Studios and Machinima are about to release the animated adventure Transformers: Combiner Wars in August 2016.

At the end of March, I was recruited by buddy, Gaku Inada (INADA STUDIOS) to scratch build buildings and destroyed structures for use in a four part prelude series, Prelude to the Combiner Wars. The first installment airs June 28th, 2016. Under Gaku's creative direction, pretty much all my modeling time and efforts went into helping create the environments the characters the viewer sees move throughout while telling their story. The four-episodes will prime fans for the full series, conveying to them the current state of Cybertron and Caminus from each of the four character's points-of-view.

Gaku provided me with his concept sketches, which I did my best to follow. I created the miniature structures with styrene rod, tube, card and basic detailing products from Plastruct, Evergreen or Tamiya. I bashed Star Wars, Gundam, ship, aircraft, Saturn, Mercury and nuclear rocket kits to for their shape, structure or surface details. I hear the guys at Hasbro where pleased with my work and will take the builds on the road to display at various comicons they're attending to promote the Transformers reboot.

The models were shot using a digital camera seated on a dolly. After, the images were digitally enhanced and added to the animated sequences. Gaku wanted the cartoon’s environments to have a certain level of perspective and movement; a particular nuance he was after not achieved solely by using CGI to an environment. He believes integrating actual miniatures into the CGI production adds to the overall visual depth and sense of movement within the characters' world. 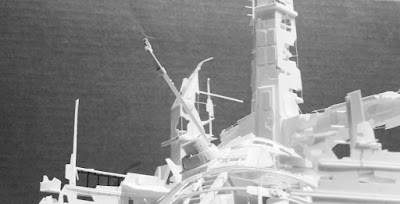 Above: Entrance to dead city 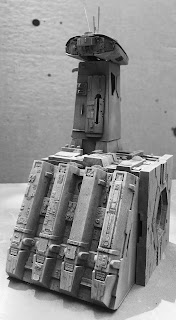 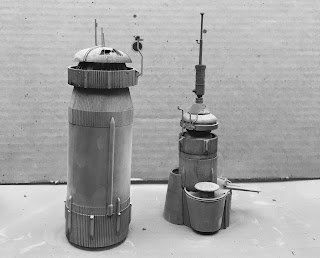 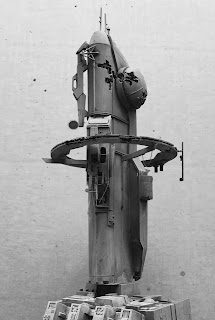